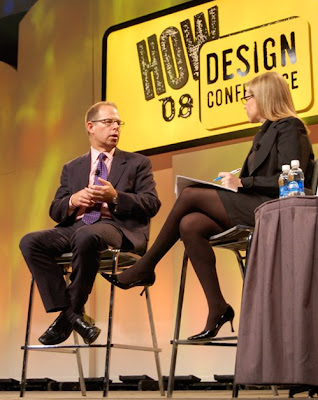 The Michael Beirut lecture was a little different than all the other presentations in the fact that it was in an interview format, which in someways was much more educating and entertaining than the typical speech, here is my work, this is my script, here is my keynote (powerpoint for you windows users).

He touched on topics than ranged from the boring minutia of what he eats for breakfast and his daily 3 mile run, to the obsure and offensive topics of hitler and an unfortunate email mishap of referring to a client as a skank. And in an early question on whether he would accept the Cooper-Hewitt Design Mind Award at the White House, Beirut answered that for personal reasons he will NOT because of the decisions and actions of the Bush administration, which evoked nearly 30 people to stand up and leave the lecture only 10 minutes in, publicly expressing their own support for our current President and in protest of Beirut's appearance.

As side from that, the rest went rather smoothly, answering questions from selected bloggers handpicked from the interviewer, Debbie Millman. Beirut spoke about his start at Mossimo Vignelli and his success at London based agency, Pentagram, noting that Mossimo limited himself and others to just five typefaces including Bauer Bodoni, Garamond, Century, and of course Helvetica.

Beirut then offered up a few tips on dealing with clients and having a better understanding of the designer/client relationship.

1 - They're scared. The client has admitted just in seeking out design, that they have a problem that they can't solve, they're defensive and concerned that they won't be listened to, and they're concerned the creative agency will force their own views and ideas that may or may not mesh well with theirs. They may physically looked frightened, but in most cases be over confident and dominant. Beirut's advice - listen, listen, listen. Listen so much that they come out of the meeting thinking, 'Hey this guy really gets me.' The client will feel better they got their message across and will have lowered their defenses.

2 - Wear them down. Keep a particular concept going for a while with revisions, meetings, calls, etc., get them almost sick of all of it, and then just close to the end, present the real design that was in the back pocket the entire time. At that point, the client has been drained and will enthusiastically accept this new and incredible solution. (Beirut referred to the great Foreman - Ali fight, when George Foreman allowed Muhammad Ali to pummel him against the ropes for 10 rounds to drain his energy, only to come back with one devastating blow to knock him out cold, in what Foreman called, 'Rope and Dope'.

3 - It's all political. Beirut mentioned the political mantra of his co-worker, Paula Scher, who sees the political dynamic of clients, committees, and meetings. That everyone at that desk has a role whether that be the aggressor, the kiss-up, or the silent powerplayer. And it's up to the designer to recognize that larger list of characters, how they play off each other, and how to manipulate the situation to their advantage.

Beirut offered one more tip to designers looking to create more business for their own agencies. He suggested sending out 15 copies of the latest piece produced (an impressive one). Five to the press, five to existing clients (past or present), and five to new prospective clients. Beirut also touched on when a mid-project termination of the client relationship is absolutely necessary, add up the internal costs incurred thus far, communicate that, and then ask what THEY think is fair for payment. Banking on the natural tendency of the client (and people in general) to give more or at least be fair when having the power to determine compensation or debt.

Finally he gave opinions of a few recent corporate rebrandings - AT&T, UPS, Kodak, mentioning his blog post on AT&T as simply being - 'I wish I were dead', which got a few laughs from the audience. All in all, a very informative and humorous look inside the mind of one of the most prominent and successful graphic designers today, and a definite highlight of this year's HOW Design Conference.
Posted by Chip at 7:11 PM